Balzac Billy is the prairie prognosticator, meaning, he predicts weather according to present indications or signs. Balzac area residents, consisting primarily of farmers, have always depended on Billy’s weather predictions for the upcoming growing season. The story of Balzac Billy begins many years ago. Merle Osborne (the first person who ever really got close to Billy) got a phone call from a radio station in northern Alberta, who had heard about Billy. Merle passed on his forecast and from there and it mushroomed. In time, newspapers, television and radio stations, and weather experts from all over the world were calling Merle every February 2nd to get Billy’s forecast for spring. Billy made a few foul predictions that some locals took offence to. A few even had the tenacity to blame Billy for the long winters and Billy even received a couple of death threats! 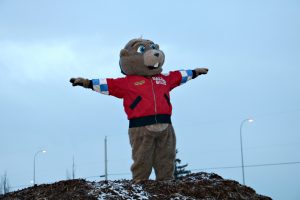 return to a life in the public eye. Billy takes pride in his community and has been forecasting publicly for about the last thirty five years now. When Billy is out and about you really notice him, however, he is a shy and quiet groundhog that says very little. Billy is no movie star; he’s just a lonely weather man.

Merle Osborne served Billy a special breakfast each Groundhog Day consisting of oatmeal porridge sprinkled with flax seed, a little maple syrup, and a glass of orange juice. This breakfast is still served each Groundhog Day from the lunch counter at the Balzac General Store.

Billy is a gopher, however that’s his common name. He’s really a Richardson Ground Squirrel; a common species in Alberta, with plump, yellowish-grey fur and short tails. Billy eats seeds, leaves, roots and flowers, as well as some insects, and of course his annual Groundhog Day Breakfast! Billy and his family hibernate from September to February with some of the females beginning hibernation as early as June! During the spring and summer months,

Billy can often be found in and around the Balzac area, listening to Country music, getting some sun, and representing the Balzac Business Community Association by appearing at special events.